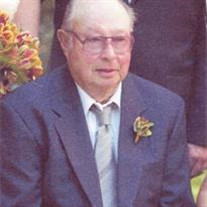 Berlon Roy â€œLonnieâ€ Spies was born April 6, 1929 in Dodge County, Nebraska to Ben and Matilda (Rodewald) Spies. He attended Dodge County rural schools, North Bend Public and graduated from Fremont High School. He owned and operated Lonnieâ€™s Trailer Sales since 1955 and was a partner in Manufactured Mobil and Modular Homes in North Bend for many years. Lonnie and Donna Duda were married in Logan, Iowa on March 15, 1949 and made their home in Schuyler. Lonnie was a past member of the Schuyler Chamber of Commerce, Schuyler Rotary, Schuyler Development Corporation and served on the Planning Board. He was currently a member of the Manufactured Homes Association. He farmed in both Butler and Colfax Counties and loved being â€œout at the farmâ€. He enjoyed children (especially his grandchildren and great grandchildren), gardening, collecting antiques (crocks were his favorite), and going to the Nebraska State Fair (where he was last Sunday) and Husker Harvest Days. Lonnie died August 28th at his home very unexpectedly at the age of 83. Lonnie is survived by his daughter, Cheryll (Don) Cook of Schuyler; grandchildren, Dr. Karrie Weber and her husband Ron Anderson of Lincoln, Pamela and her husband MSgt Allen Brezenski stationed in Minot, ND., Donald Cook III of Ogallala, great grandchildren, Will Anderson, Logan and Jacen Cook; sister, Mary Lou (Gerald) Ullrich of Cincinnati, OH.. He is preceded in death by his wife, Donna (September 14, 1990); sisters, Murriel Groeteke, Naomi Nevius and Gloria Mae Krammerer; brother, Bernard Spies. Family suggest memorial to The Colfax Foundation in lieu of flowers. The funeral lunch will be sderved at St. John's Lutheran Church, 9th and Denver Streets.

The family of Lonnie Spies created this Life Tributes page to make it easy to share your memories.

Send flowers to the Spies family.