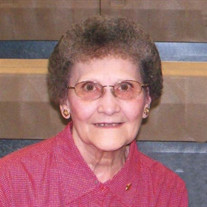 Lorene Hegemann, 93, formerly of Howells, passed away Wednesday, December 20, at the Clarkson Care and Rehabilitation Center. Memorials can be directed towards Howells Community Catholic Schools, Howells Ballroom, or the Howells Community Foundation. Lorene was born on July 10, 1924 to Anton and Annie (Maliha) Fendrick on the family farm near Wilson. On April 17, 1947 Lorene married Adolph Hegemann at St. Mary's Catholic Church in Wilson. For many years Lorene was a farm wife who worked along side Adolph doing chores or any other tasks that needed tended to on the farm and raising their children. After Adolph's death in 1985 Lorene uprooted from the farm and moved to Howells where she worked for many years at Doerneman Hardware. Lorene loved spending time with her family, and would light up whenever her grandchildren and great-grandchildren came to visit. Her favorite activity when the family got together was to start up a game of pitch or pinochle. She took great pride in the vegetables and flowers she grew in her garden and canning the fruits of her labor or even peaches or meat. Lorene also loved baking, embroidering, attending dances at the Howells Ballroom, or could be found on game day taking notes on how the Huskers were playing that day. Survivors include her son: Gene (Helen) Hegemann of Columbus; daughters: Janice (Galen) Renner of Howells, Eileen Mueller of Lincoln, and Joyce (Dan) Schlautman of Lincoln; 19 grandchildren and step grandchildren; 28 great-grandchildren and step great-grandchildren; 1 Step great-great-grandchild. Sister: Arlene Hegemann of Dodge; Brothers-in-Law: Bob(Alice) Hegemann of Fremont and Vic (Mary Ann) Hegemann of Bedford, TX; Sisters-in-Law: Joan Fendrick of Columbus, Arlene Doerneman of Fremont, Sister Myriam Hegemann of Milwaukee, WI, and JoAnn Hegemann of Howells and many nieces and nephews. Lorene is preceded in death by her parents, husband: Adolph(1985), son: Gerald Hegemann(1958), grandson: Dave Mueller(2013), and numerous brothers, sisters, nieces, and nephews.

The family of Lorene A. Hegemann created this Life Tributes page to make it easy to share your memories.

Send flowers to the Hegemann family.