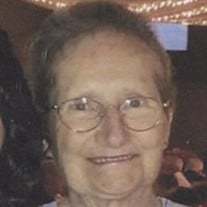 Mass of Christian Burial for Lorraine Schlautman, age 80 of Howells, will be held on Tuesday, March29, 2016 at 10:30 AM at St. Peter’s Catholic Church in Stanton. Visitation will be held at the church on Monday from 4 PM to 7 PM with a 7 PM rosary. Burial will be held at 2 PM on Tuesday at St. Henry’s Catholic Cemetery rural Howells. Lorraine was born August 16, 1935 in the Klouch Hospital in Schuyler to Ladislav and Anastasia (Svitak) Balak. She attended grade school at Cumming County Rural District #77 through 7th grade and then when that district closed she completed 8th grade at District #51. Lorraine graduated from Howells High School in 1952. On January 10, 1955 she and Alvin E. Schlautman were united in marriage at St. Henry’s Parish northwest of Howells. They farmed for a short time near Clarkson before moving to the family farm north of Howells. Lorraine enjoyed her grandchildren, music and dancing, baking, reading, working in her garden and walking. Lorraine became a member of St. Peter’s Catholic Church in Stanton after St Henry’s Parish closed. She was a life member of the V.F.W. and the American Legion Auxiliaries. Lorraine died March 24, 2016 at the Stanton Health Care facility where she had been a resident since December of 2015. Lorraine is survived by their four children; Peg (Glenn) Brabec of Clarkson, Greg (Donna) Schlautman of Pilger, Mark(Elizabeth Carraway) Schlautman of Clemson, SC and Brian (Lisa) Schlautman of Gretna; seven grandchildren, Matthew (Amanda) Brabec of Stanton, Daniel and Eric Schlautman of Gretna, Nicole (fiancé, Tim) Schlautman and Emily Schlautman of Lincoln, Rachel (Jarrett) Koch of Humphrey and Denise Schlautman of Clemson, SC; 2 sisters-in-law, Delores Balak of McKinney, TX and Fern Schlautman of Bloomfield. She is preceded in death by her husband, Alvin (6/14/2010); daughter, Denise 12/7/1964; sister, Ann Ruskamp; brother, Allen Balak; brothers-in-law, Irvin Ruskamp and Robert Schlautman. . Family suggest memorials to St. Henry’s Catholic Cemetery . Funeral lunch will be served at the church immediately after mass.

Mass of Christian Burial for Lorraine Schlautman, age 80 of Howells, will be held on Tuesday, March29, 2016 at 10:30 AM at St. Peter&#8217;s Catholic Church in Stanton. Visitation will be held at the church on Monday from 4 PM to 7 PM with... View Obituary & Service Information

The family of Lorraine Schlautman created this Life Tributes page to make it easy to share your memories.

Mass of Christian Burial for Lorraine Schlautman, age 80 of Howells,...

Send flowers to the Schlautman family.