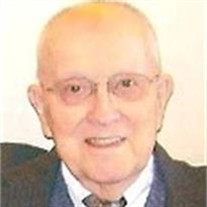 Louis (Louie) DuPlanti, 88, of Schuyler passed away Tuesday, May 14, 2013. Louie (Papa) was born May 8, 1925 in Adams, New York in the Saranac Lake area. He was the fourth of five children born to Leon and Lydia DuPlanti. He spent his early years there in upstate New York, not far from the Canadian border. At the age of 10 years his natural father, Leon, passed away. A few years later his mother remarried to Harold Hastings, a seaman from the San Diego area in California. Soon the children that were still at home found themselves accompanying their mother and new father to California which became Louie's new home for many years. It was here that he met "his girl", Nellie Thayer, who became his wife on January 16, 1946. They lived there in the San Diego area becoming parents to four children, Margaret, Sharon, Thomas and Lorinda. In 1969 they moved as a family to Bowie, Texas. For the next 35 years, Bowie was their home town. Throughout the years Louie had provided for his growing family with the trade of auto mechanics learned from his natural father, either working for someone in a car dealership or working for himself in his own business. Sprinkled in there also were years of over the road truck driving for various companies. After moving to Texas and starting out in mechanics, as the years passed and the children grew up, his real love of driving became his focus until his retirement in the early 1990's. In 2004, Louie and Nellie moved to Schuyler, Nebraska. As they got older and their health became more of a concern, they realized they might soon need the help of family, so they moved to be nearer their son, Tom, and one of their daughters, Sharon. As a young man, Louie, became one of Jehovah's Witnesses being baptized on March 11, 1941. He shared in different aspects of service as one of Jehovah's Witnesses. He enjoyed being part of the Theocratic Ministry School giving short Bible talks or readings. At times he was able to share in the construction of meeting halls, one that he was able to assist on was an assembly hall in Denton, Texas that is still being used and enjoyed today. He also enjoyed volunteer work at the yearly assemblies and conventions that Jehovah's Witnesses hold After his retirement, he enjoyed woodworking. He became quite proficent in the art, creating many pieces for family and friends to enjoy out of scraps of wood that you normally would throw away. He was a saver, growing up during the depression years, he was careful to keep things that could be useful at a later time. As one of Jehovah's Witnesses, Louie, had in mind the promises of a paradise earth. After losing his wife, February 1, 2013, the hope of seeing her again right here on earth without the handicap of old age, and sickness was an encouragement to him. That hope was real to him, and it helped him to cope until his death in the early morning hours of May 14, 2013. Louie is survived by his four children, Margaret (Larry) Wiggins of Pleasant Hill, Missouri. Sharon (Paul) Draper of Octavia, Nebraska. Thomas (Mary) DuPlanti of Schiuyler, Nebraska. Lorinda (Kent) Teller of Hamilton, Missouri. His sister Kathryn Edwards of Exeter, California and brother Donald (Cynthia) DuPlanti of Gainesville, Texas. Also among the survivors are twenty-one grandchildren, twenty great-grandchildren and many nieces and nephews. He was preceded in death by his wife, parents, and step-father, and two brothers, Robert and Theodore. A private family Memorial will be held at a later date. The family suggests in lieu of flowers any memorials be directed to the Worldwide Work of Jehovah's Witnesses.

Louis (Louie) DuPlanti, 88, of Schuyler passed away Tuesday, May 14, 2013. Louie (Papa) was born May 8, 1925 in Adams, New York in the Saranac Lake area. He was the fourth of five children born to Leon and Lydia DuPlanti. He spent his early... View Obituary & Service Information

The family of Louis DuPlanti created this Life Tributes page to make it easy to share your memories.

Send flowers to the DuPlanti family.