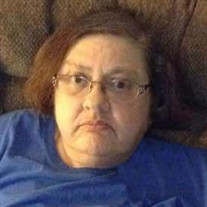 Louise Martens, 58, of Schuyler passed away Monday, September 25, 2017 at the Nebraska Heart Institute in Lincoln. Memorials can be made to Family Wishes. Louise was born February 14, 1959 in Fremont to Louie and Lucille (Majerus) Leeper.... View Obituary & Service Information

The family of Louise Martens created this Life Tributes page to make it easy to share your memories.

Send flowers to the Martens family.