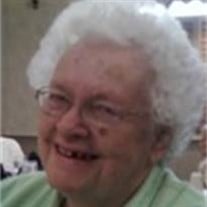 Marcella was born October 24, 1921 in Schuyler to Joseph J. and Mildred (Dolezal) Severyn. She attended Schuyler Schools and after graduating from Schuyler High School in 1944 she attended the University of Nebraska and received an associate Degree in Elementary Education. She then taught grades 5 and 6 in Clarks and then grades 3 and 4 at North Ward in Schuyler. She was a memer and an officer in the Schuyler PTA and served as a Girl Scout leader. Marcella and Robert C. Dvorak were married July 27, 1948 at St. Mary's Catholic Church in Schuyler and they spent their married life on the Dvorak family farm, the third generation on the same land. Marcella helped organize the Wilson Community Extension Club in the early 1950's. She served as county chairman and two terms as Extension Club State District Director as well as serving on the Colfax County Extension Council. She helped organize the Wilson Jr. Homemakers 4-H Club and was the leader for 10 years. In 1965 Marcella served as a member of the Nebraska State Advisory Council for the University of Nebraska College of Agriculture and Home Economics Marcella wrote for the Catholic Workman monthly newspaper for several years. In 1977 she began as the Wilson correspondent, feature writer and Country Mile columnist for the Schuyelr Sun and continued until she retired in 2004. She served as substitute organist at Our Lady of Perpetual Help Church, Wilson, and at St. Mary's Catholic Church in Schuyler. She was also the organist at the Benedictine Mission House since 1980. She was a member of St. Mary's Guild, a CCD teacher for several years and a member of the Catholic Workman Lodge, Branch 40 at ilson. She was instrumental in the preservation of the Wilson Church and Cemetery as a National Historic site. Marcella died February 6th, at the age of 84, at Birchwood Manor in North Bend where she had been a resident for the past three months. Marcella is survived by her seven children, Michael (Lynn) Dvorak and Joseph Dvorak both of Clarkson, Joan Salak and Janet Dvorak both of Columbus, Jean (Gary) Bouc of Lincoln, Judy (Ron) Eller of Kodiak, AK and Jane Dvorak of Schuyler; 13 grandchildren; 15 great grandchildren; sister-in-law, Marcella Votova of Schuyler. She is preceded in death by her parents and her husband, Bob (April 28, 1996). Family suggest memorials to Wilson Cemetery Funeral lunch will served at the St. Mary's Social Center immediately after the mass. Burial will be held at 2:30 PM on Thursday at Wilson Cemetery. To leave a message for the family - at the top of this page click "Send Condolences" / fill in YOUR name and e-mail address / type in your message / click PRIVATE (type in code) or PUBLIC / click "Add Memorial entry".

Marcella was born October 24, 1921 in Schuyler to Joseph J. and Mildred (Dolezal) Severyn. She attended Schuyler Schools and after graduating from Schuyler High School in 1944 she attended the University of Nebraska and received an associate... View Obituary & Service Information

The family of Marcella Dvorak created this Life Tributes page to make it easy to share your memories.

Send flowers to the Dvorak family.