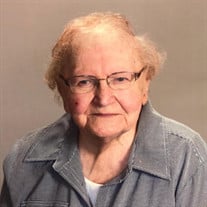 Margaret Brester, 88, of Howells, passed away Thursday, July 23, 2020 at St. Francis Memorial Hospital in West Point. Memorials are suggested to Family Wishes. Mass of Christian Burial will be held on Tuesday, July 28 at 10:30 a.m. at S.S. Peter and Paul Catholic Church in Howells with Fr. Stan Schmit officiating. Visitation with no family present will be Monday from 5 until 7 p.m. with a parish rosary at 7 p.m. all at the church. Socially distanced seating by household will be observed for the rosary and mass. Interment will be in the S.S Peter and Paul Catholic Cemetery. Svoboda Funeral Home of Schuyler is handling arrangements for the family. Mass will be streamed to the funeral home Facebook page: www.facebook.com/SvobodaFH Margaret Susan Brester was born on February 27, 1932 in Adrian, Minnesota to Peter and Mary (Saner) Engbarth. She attended school through the 8th grade in Adrian. On a trip to Nebraska to help her sister Lorna with her children, Margaret attended a dance at the Howells Ballroom and met Gilbert Brester. The couple was later married on January 9, 1952 at St. Adrian’s Catholic Church in Adrian, Minnesota. The couple moved to a farm north of Howells where they farmed for 42 years, in 1994 they moved into Howells. Once all of their children were graduated or in high school, Margaret took on a new role as an aide at the Parkview Nursing Home in Dodge, a job she loved and worked at for over 30 years. She was very active throughout her life being a member of the Christian Mothers, helping to host many events with the Legion Auxiliary, and led a 4-H group for several years. Margaret loved getting together once a month with friends for their “Birthday Club” celebration and for the senior potluck dinners. In her spare time, she loved making fleece blankets for everyone in her family. Margaret loved becoming a grandmother and great-grandmother as she enjoyed getting to spoil all of her grandchildren. Margaret is survived by her sons: Duane (Cindy) Brester of Dodge, Jerome (Donna) Brester of Howells, Russell (Kathy) Brester of Arlington; daughter Mariette (Randy) Hellerich of Elkhorn; 8 grandchildren and 13 great-grandchildren; sisters: Alice Gibbs, Geneva Kiefer, and Marlene Hoffman; sister-in-law Delma Brester; brother-in-law John Brester, and several nieces and nephews. She is preceded in death by her parents, husband Gilbert in 2008, four children MaryAnn, Arlene, Paul, and Kenny Brester; three brothers Vernon, Edward, and Norbert Engbarth; and sister Lorna Faltys.

Margaret Brester, 88, of Howells, passed away Thursday, July 23, 2020 at St. Francis Memorial Hospital in West Point. Memorials are suggested to Family Wishes. Mass of Christian Burial will be held on Tuesday, July 28 at 10:30 a.m. at S.S.... View Obituary & Service Information

The family of Margaret S. Brester created this Life Tributes page to make it easy to share your memories.

Send flowers to the Brester family.