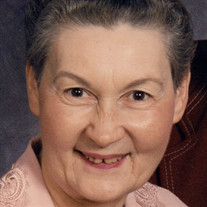 Funeral mass for 86 year old Margaret Haase, formerly of Schuyler, will be held at 10:30 AM on Wednesday, July 9, 2014 at St. Augustine’s Catholic Church in Schuyler. Visitation will be held at the Svoboda Funeral Home North Chapel on Tuesday from 3 PM to 7 PM and on Wednesday from 9 AM to 10:15 AM. A combined parish and Knights of Columbus rosary will be recited at the North Chapel at 7 PM on Tuesday. Burial will be held at 3:30 PM on Wednesday at Lincoln Memorial Park in Lincoln. Marj was born January 6, 1928 in Fairfield, NE to James and Anna (Pochop-Bednar) Koci. She studied to become a nun in St. Louis from 1942 to 1944 but returned to Nebraska and graduated from Herbon High School in 1946. She met Carl “Gil” Haase through mutual friends while she was working at the Elgin Watch Factory in Lincoln and on February 14, 1956 they were married at the Lincoln Air Force Base. Gil was the manager of the Cinderella Motel in Shawnee, OK and Marj worked as the cashier in the restaurant. They moved to Columbus in 1981, and moved to Schuyler in 1985. Marj loved bowling and is a member of the Nebraska Bowling Hall of Fame. She was a Paul Harris Fellow through the Rotary Foundation. Following Gils’ death on July 10, 2010 Margaret moved to Omaha and then in 2012 she moved to Tulsa to be close to their daughter. Margaret died July 4, 2014 in Tulsa, OK. Margaret is survived by their son, Michael F. (Diana) Haase of Leesburg, VA and his son, Brandon: their daughter, Michelle (Lloyd) Stevens of Tulsa, OK and her daughter, Kristal; two brothers, Vaclav Koci of San Diego, CA and Arnold Koci of Laguna Niguel, CA; one sister, Jo Anne Whales of England. She is preceded in death by her parents; husband, Carl; two brothers, Albert and Edward Koci.

Funeral mass for 86 year old Margaret Haase, formerly of Schuyler, will be held at 10:30 AM on Wednesday, July 9, 2014 at St. Augustine&#8217;s Catholic Church in Schuyler. Visitation will be held at the Svoboda Funeral Home North Chapel on... View Obituary & Service Information

The family of Margaret M. Haase created this Life Tributes page to make it easy to share your memories.

Send flowers to the Haase family.