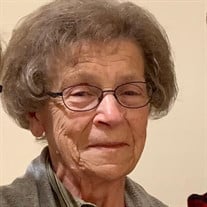 Mariann Rose Polodna was born on September 7, 1934 in Dodge, Nebraska. She graduated from Dodge High School in 1952. On October 19, 1954, she married Robert (Bob) Polodna. They farmed near Clarkson and moved to Schuyler after they retired. After Bob’s death, Mariann moved to the Heritage at Sterling Ridge in Omaha where she died on December 22, 2021 at age 87. Mariann is survived by 4 children, Diane (Gary) Vig of Minneapolis and their daughter Rachel; Duane (Kathleen) Polodna of Omaha and their children Angela (Mal) and Brian (Anna); Donald (Nancy) Polodna of Norfolk and their children Mallery (Marc), Austin, and Alex; and Daniel (Cheryl) Polodna of Omaha and their children, Nick, Jake, and Katie. Mariann is also survived by 2 great-grandsons, Henry and Malachi. In addition, she is survived by her brother, Norbert (Delma) Pieper, sister-in-law, Rita Pieper; and many nieces and nephews. She was preceded in death by her husband, Bob; parents, Theodore and Clara Pieper; sister and brother-in-law, Virginia and John B. Kreikemeier; and brother, Bernard Pieper. Mariann was happiest when she was busy. She enjoyed gardening and canned many fruits and vegetables. She also enjoyed sewing and made many of her clothes and her children’s clothes. Mariann loved to play cards and wore out many card decks during her lifetime. She worked part time at the Schuyler Memorial Hospital for nearly 25 years after her children graduated from high school. Mariann will be remembered as a loving, wonderful mother and grandmother. She lived her life with kindness, and she smiled and laughed often. She will be missed terribly and loved always. Due to COVID, a private family service will be held on December 27, 2021 at St. Mary's Catholic Church in Schuyler, Nebraska. Condolences and memorials can be mailed to the Polodna Family at P.O. Box 267 Schuyler, NE 68661. Arrangements by Svoboda Funeral Home, Schuyler, Nebraska (www.svododafuneralhome.net). Memorials can be directed towards the Alzheimer’s Association. Live streaming will be available through the Svoboda Funeral Home Facebook page and will begin 10 minutes prior to the parish rosary at 10:30 a.m. Monday. To watch the livestream click the link www.facebook.com/SvobodaFH/ and look for the live video feed Monday morning.

Mariann Rose Polodna was born on September 7, 1934 in Dodge, Nebraska. She graduated from Dodge High School in 1952. On October 19, 1954, she married Robert (Bob) Polodna. They farmed near Clarkson and moved to Schuyler after they retired. After... View Obituary & Service Information

The family of Mariann R. Polodna created this Life Tributes page to make it easy to share your memories.

Send flowers to the Polodna family.