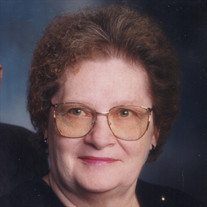 Marlene Cech, 74, of Schuyler, passed away Sunday, November 16th at David Place in David City. A funeral service will be held at 10:30 a.m. Wednesday, November 19th at Svoboda Funeral Home North Chapel. Visitation will be Tuesday from 5 – 7 p.m. and Wednesday 9:30 a.m. to 10:30 A.m. at the North Chapel. Burial will be in Schuyler Cemetery. Marlene was born January 25, 1940 in Linwood, NE to Leo and Adaline (Dorsey) Mares. She graduated from Linwood High School. On Feb. 8, 1956 Marlene married Vernon Cech in Schuyler. Marlene was a C.N.A. at David Place in David City for 17 years, and for 4 years at the Schuyler Hospital before retiring in 2004 following knee surgery. Marlene was a member of the V.F.W. Ladies Auxillary, she enjoyed flowers, puzzles, reading and family, especially her grandchildren and great grandchildren. Marlene is survived by sons: Vernon (Megan) Cech and Arlyn (Debra) Cech, both of Norfolk; daughters: Melveen (Richard) Eaton of Columbus and Sherri Newman of Schuyler; grandchildren: Debbie (Donnie), Eric (Laura), Amy (Nick), Curtis (Lacey), Courtney (Shawn), Jaiden, Jeremy, Jodey, Farrah, Casey and Kelley; great grandchildren Braeden, Cruz, Gavyn, Chloe, Madden, Taven and another one to join the family in the near future. Marlene was preceded in death by her parents, husband Vernon in 2003 and 2 great grandsons, Jeremiah and William. Memorials are suggested “In Care of the Family”.

The family of Marlene Cech created this Life Tributes page to make it easy to share your memories.