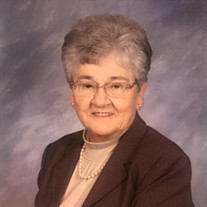 Mary Ann Pernicek, 92, of Schuyler, passed away Sunday, September 13, at her home in Schuyler. Memorials can be directed towards Sts. Peter and Paul Catholic Church in Abie, the Abie Volunteer Fire Department or the Schuyler Volunteer Fire Department. Mass of Christian Burial will be held on Friday, September 18, at 10 a.m. at Sts. Peter and Paul Catholic Church in Abie with Fr. Ronald Homes officiating. Visitation will be held on Thursday from 5:30 until 7:30 p.m. at the church with a parish rosary recited at 7:30 p.m. Interment will be in the Sts. Peter and Paul Cemetery with lunch following in the church basement. Mary Ann was born on September 4, 1928 on a farm northwest of Abie to Joseph F. and Lucy (Bartunek) Prochaska. She attended Abie School District 25 and graduated from Schuyler High School in 1946. On November 21, 1950, she married Leonard F. Pernicek at Sts. Peter and Paul Catholic Church. The couple lived and farmed about 4 ½ miles northwest of Abie, where 5 children were born to this union. After working to raise their 5 children, Mary Ann held several jobs in the Schuyler area. She worked for many years at Bosh’s Restaurant, for two years she helped Dr. Mike McNally start his dental practice, and worked at the Schuyler Dental Clinic for 32 years for Dr. Ron Dolezal (where she recently retired in 2019 due to her health). Mary Ann loved going to as many of her grandchildren’s activities, she enjoyed listening to Polka music, going to local dances, and baking kolaches and strudel. She loved tending to her flowers and could regularly be found outside admiring their beauty. Mary Ann was a life-long member of Sts. Peter and Paul Catholic Church and remained an active member. She is survived by her children: Pat (Gene) Supancheck of David City; Bob (Connie) Pernicek of Schuyler; Peg Strong of Schuyler; Jim (Mary) Pernicek of Ravenna, Nebraska; and Tim Pernicek of Williston, North Dakota; 17 grandchildren 20 great-grandchildren; and 2 sisters-in-law Bernie Prochaska of Abie and Rose Jambor of David City. Mary Ann is preceded in death by her parents, husband Leonard in 1995, brother Joe Prochaska, infant great-grandson Logan Strong, brothers-in-law Albert Jambor and Ernie Pernicek, and sister-in-law Gladys Pernicek.

Mary Ann Pernicek, 92, of Schuyler, passed away Sunday, September 13, at her home in Schuyler. Memorials can be directed towards Sts. Peter and Paul Catholic Church in Abie, the Abie Volunteer Fire Department or the Schuyler Volunteer Fire... View Obituary & Service Information

The family of Mary Ann Pernicek created this Life Tributes page to make it easy to share your memories.

Send flowers to the Pernicek family.