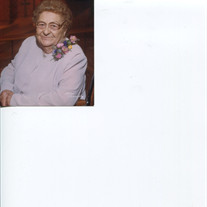 Funeral mass for 97 year old Mary “Marie” Marushak of Abie will be held at 10 AM on Wednesday, April 30, 2014 at St. Anthony’s Catholic Church in Bruno. Visitation will be held at the church on Tuesday from 4 PM to 7 PM followed by a 7 PM rosary. Visitation on Wednesday will start at 9 AM. Burial will be in the St. Peter & Paul Catholic Cemetery at Abie. Mary was born May 25, 1916 at Prague to Andrew and Mary (Vyhlidal) Havlovec. She graduated from Prague High School in 1934 and on January 16, 1935 she married Joseph Stuchlik. On January 4, 1962 Mary married Irvin (Ding) Marushak. Together they owned and operated Ding and Marie’s Bar in Abie. Mary had worked at the Mead munitions plant, the egg plant in David City and cooked at Bosh’s Restaurant in Schuyler and Kelly’s Café in Abie. She enjoyed cooking, gardening, baking and canning. Mary died April 25, 2014 at David Place Nursing Home in David City where she had been a resident the past two years. Mary is survived by her daughter, Loretta Ferguson of Fremont; seven grandchildren, Kerry Krivanek (Denise Brunner) of Morse Bluff, Kelly Lingerfelter ( David Slusar) of Abie, Kim Krivanek (Dave Bader) of Columbus, Alan (Shelly) Holzerland, Dale (Sandy) Holzerland, Nichole (Paul) Mooney all of Fremont, and Cindy (Doug) Glenn of Auburn; 9 great grandchildren; 8 great great grandchildren; one sister, Hattie Claussen of Norh Bend; one brother, George Havlovec of North Bend. She is preceded by her two husbands, Joe Stuchlic (11-13-1955) and Irvin Marushak (2-14-1985); one daughter, Dorothy Krivanek (3-25-2000); one grandson, Brian Holzerland; 3 brothers, Andrew, Adolph and Victor Havlovec. Funeral lunch will be served at St. Anthony's Parish Hall

The family of Mary "Marie" Marushak created this Life Tributes page to make it easy to share your memories.

Send flowers to the Marushak family.