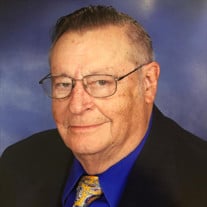 Merlin (‘Doc’) Ladean Sucha passed peacefully into eternal rest with family at his side on August 26, 2020 at The Heritage at Meridian Gardens assisted living facility, after a brief illness. Memorials can be made to Family Wishes for later designation. Mass of Christian Burial will be held on Saturday, August 29, at 1 p.m. at St. Augustine Catholic Church in Schuyler with Fr. Gerry Gonderinger officiating. Visitation will be Friday from 5 until 7 p.m. at Svoboda Funeral Home-North Chapel, with a parish rosary at 7 p.m. Visitation will continue on Saturday from 12 until 1 at the church. The Mass and Rosary will be live-streamed to the Svoboda Funeral Home Facebook page: www.facebook.com/SvobodaFH. Current Covid-19 seating restrictions will be followed for the Mass and Rosary. Interment will be in the Schuyler Cemetery with lunch following at The Library Event Center located at 1123 A St. Svoboda Funeral Home is handling the arrangements for the family. Merlin was born September 15, 1926 in Leigh, NE to Henry & Agnes (Klimes) Sucha. The family lived on several farms in the Leigh, Stanton areas until finally settling on a home property north of Richland, NE. He graduated from Leigh High School; he completed his higher education at Midland College. While working to put himself through school by doing road construction in the summers, he graduated from the University of Nebraska Medical Center in 1955. After completing an internship training year at St. Joseph’s Hospital and 2 years of practice in O’Neill Nebraska, he relocated the family to Schuyler, NE. When the American Academy of Family Practitioners was formed, Merlin spent several years of additional study, CME and testing endeavors in order to become a Diplomat of the Academy, an achievement that brought him great professional satisfaction. Merlin practiced the art & science of Medicine in Schuyler, NE for 37 years where his generous civic spirit found him also serving the community on the school board of Schuyler Central High School, Schuyler Memorial Hospital Board of Directors, Schuyler Historical Museum Executive Board, Rotary and the Schuyler Chamber of Commerce; he was also extremely active in the local chapter of the Boy Scouts of America where both of his sons achieved their Eagle Scout. Merlin met his future wife and life-long soulmate, Delores Dolezal, at the Howells Ballroom during one of the Saturday night dances that were popular ‘back in the day’. They were married in 1953 at the Heun Holy Trinity parish. Merlin was a devoted husband and proud father and grandfather. He and Delores shared a love of the arts and instilled this appreciation in his children. He received great enjoyment in supporting their musical development. As a 15+ year seasoned band and choir parent he attended musical performances of his children and later his grandchildren. He loved following his children’s & grandchildren’s athletic events. Merlin enjoyed golf, fishing with his kids and was a lifelong Cornhusker fan. Friends and colleagues enjoyed his wry sense of humor, occasional good natured practical jokes and outrageous outfits he would wear for special holidays. Merlin had a deep religious foundation and commitment to preserving and promoting his Catholic faith, serving on the St. Augustine Parish Council and as a Eucharistic Minister; a member of the Knights of Columbus, Fourth Degree Knights and Grand Knight of the local council. Farming remained important and never left his heart; he enjoyed swapping stories/information with local farmers & his son-in-law, driving out and checking fields, collecting John Deere models and finding antique items at auctions. Merlin was a ‘Renaissance man’, with many talents and interests through the years. After learning stained glass artistry, his creations became treasured gifts to family & friends as well as popular donations for local charity fund raisers. He was widely read and counted daily crossword puzzles, woodworking, coin, stamp & rock collecting among his hobbies; he was a ‘Mr. Fix-it’ combining that talent with utilizing every little thing saved over the years. Merlin retired from medical practice in 1995 in order to devote more time with and caring for Delores until her death in 2007. During those 12 years, with Delores kibitzing from the side-lines, he developed a knack for baking and cooking; he was fond of bringing a homemade ‘goodie’ to morning ‘Coffee Dawgs’ group or for the staff at his appointments. Following Delores’s passing in 2007, Merlin renewed his love of travel and began adventures in the U.S. as well as overseas with his family. Blessed to have shared in Merlin’s life were his late wife, Delores; two sons, Gregg Sucha and Tina Zimmerman (Manchester, MI), Bill Sucha and Gary Swanson (Minneapolis, MN); two daughters, Dr. Susan Sucha-Hull and Wood Hull (Elkhorn, NE) and Holly Svehla and Dale (Clarkson, NE). Seven grandchildren, Matthew Hull, Katie Sucha, Bailey Conger, Maggie Kruger, Hannah Sucha, Jared and Megan Svehla; two great-grandchildren Logan and Claire Krueger. Nephew Alan and Linda Sucha; Nieces: Judy O’Brien-Sucha, Vicki (Delbert) Herout, Renee (Donald) Johns, and Naomi Sucha. Merlin was preceded in death by his parents, wife Delores, brother Harold, nephew Dana Sucha and granddaughter Rachel Dolan Hull.

Merlin (&#8216;Doc&#8217;) Ladean Sucha passed peacefully into eternal rest with family at his side on August 26, 2020 at The Heritage at Meridian Gardens assisted living facility, after a brief illness. Memorials can be made to Family Wishes... View Obituary & Service Information

The family of Dr. Merlin L. Sucha created this Life Tributes page to make it easy to share your memories.