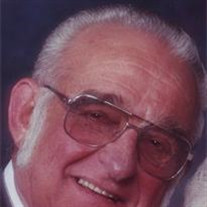 Milford was born November 6, 1934 north of Schuyler to Joseph and Helen (Valish) Svasek. He attended Fisher School and Schuyler Public School. Milford and Marlene Engelbart - Hobza were married on August 9, 1956 at Sts. Cyril and Methodius Catholic Church in Clarkson. He worked as a pin setter in the bowling alley above the Sportsman Bar as a young boy. â€œSmileyâ€ worked for Higgins Alfalfa Mill from 1952 to 1956 and then worked one year for the Schuyler Street Department. He worked for the Schuyler Department of Utilities for 43 years (1956 to 2000) and retired as the Water/Sewer Superintendent. Milford was a member of the Schuyler Volunteer Fire Department from Feb 14, 1959 thru Dec 6, 1998 and held the position of 2nd Assistant Chief and Assistant Chief. As a young man he loved helping his uncles on their farms and liked to hunt, fish and dance. He enjoyed boating and water skiing, gardening, playing pool with his sons, grandsons and brother, George and spending time with his family. Milford died November 14th at his home, at the age of 78, surrounded by his loving family and listening to his favorite country western music. He celberated his birthday with his family 8 days before he died and a few days later asked for a beer, which he got. Milford is survived by his wife of 56 years, Marlene; six children, LeAnn (Jan) Korth of Lincoln, ReJean (Jerry) Lutjens of Columbus, Janine (Jeff) Novak of Omaha, James A. (Cindy) Svasek of Columbus, Ronald (Debra) Svasek of Rapid City, S.D., Daniel (Angela) Svasek of Papillion; 14 grandchildren; 24 great grandchildren, the latest, Karli, was born on Milford's birthday; brother, George (Marlene) Svasek of Columbus; sister, Lorene (Harvey) Tuma of Columbus. He is preceded in death by his parents; sister, JoAnn (1951); great grandson, Landon Nadrachal (2004). Family suggest memorials to Schuyler Fire Dept or St. Maryâ€™s Catholic Church Funeral lunch will be served at the St. Mary's Social Center following the interment in the Schuyler Cemetery. To leave a message for the family - at the top of this page click "Send Condolences" / fill in YOUR name and e-mail address / type in your message / click PRIVATE (type in code) or PUBLIC / click "Add Memorial entry".

The family of Milford Svasek created this Life Tributes page to make it easy to share your memories.

Milford was born November 6, 1934 north of Schuyler to Joseph...

Send flowers to the Svasek family.