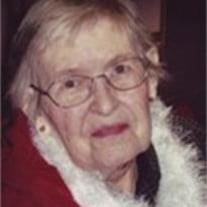 Nellie DuPlanti, 87, of Schuyler passed away Friday, February 1, 2013. Nellie (Mama) was born September 11, 1925 in San Diego, California. She was number three of seven girls born to George and Helen Thayer. She spent her younger years in the San Diego area; later as a family they moved to Cottage Grove, Oregon where she lived with her family until her marriage to Louis DuPlanti on January 16, 1946. As a married couple they lived in the San Diego area where they became the parents of four children, Margaret, Sharon, Thomas and Lorinda. They lived there until 1969 when they moved as a family to Bowie, Texas. That was their home for the next 35 years as their family grew up, moved away and started families of their own in Missouri and Nebraska. In 2004, Nellie and Louis moved to Schuyler, Nebraska. Getting older they realized that they might soon need the help of family, so they moved north to be near their son and one of their daughters, Sharon. As a young girl, Nellie became one of Jehovah's Witnesses. She deeply treasured the privilege of being a servant of Jehovah and all it entailed. She was baptized on November 1, 1939. She was a regular and active witness for Jehovah sharing her faith with many, both door to door and in the Bible teaching work, personally helping some become fellow witnesses of Jehovah. She was in the true sense an example of what a Christian wife and mother should be. Words that come to mind in thinking of her are: loving, loyal, dependable, kind, hard-working, patient - actually there is no way to list them all as they were just a part of her. She imparted loving wisdom, borne from years of faith and making do, to her children. One thing that sticks in our minds is: "Jehovah said he would give us our bread for the day, but he didn't say he would put peanut butter on it." Words that come back and help us put things in perspective and remember what's most important. She cherished the Bible's promises of a paradise earth. That hope sustained her in her final years after suffering a stroke in 2005, clear up until her death on February 1, 2013. One of the things she enjoyed was reading and that love she shared with each one of her children. They continue to enjoy that love she instilled in them clear up to today. She wasn't a fancy, fussy person. She loved to work. She loved butterflies, and hummingbirds, and wild flowers just growing in the fields and tea in a real china cup. Another thing she enjoyed was crocheting. Most evenings would find her sitting making doilies that she would pass on to family and friends. Most of her friends have at least one beautiful "memento from Nellie" adorning a shelf or table in their home. Nellie is survived by her husband of 67 years, Louis. Her daughter Margaret (Larry) Wiggins of Pleasant Hill, Missouri, daughter, Sharon (Paul) Draper, son, Thomas (Mary)DuPlanti of Schuyler, and daughter Lorinda (Kent) Teller of Hamilton, Missouri. Her sisters, Betty and Letha Myers, Charlotte Demmons of Cottage Grove, Oregon and Evelyn (Carle) Bender of Eugene, Oregon. Twenty-one grandchildren, twenty great-grandchildren and many nieces and nephews. She was preceded in death by her parents, and two sisters, Iris and Bernice. A Memorial Service will be held at a later date. The family suggests Memorials to Jehovah's Witnesses Worldwide Work. To leave a message for the family - at the top of this page click "Send Condolences" / fill in YOUR name and e-mail address / type in your message / click PRIVATE (type in code) or PUBLIC / click "Add Memorial entry".

Nellie DuPlanti, 87, of Schuyler passed away Friday, February 1, 2013. Nellie (Mama) was born September 11, 1925 in San Diego, California. She was number three of seven girls born to George and Helen Thayer. She spent her younger years in the... View Obituary & Service Information

The family of Nellie DuPlanti created this Life Tributes page to make it easy to share your memories.

Send flowers to the DuPlanti family.