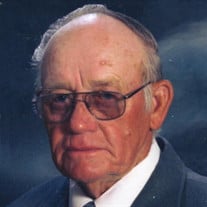 Funeral Mass for Norbert Langhorst, age 85 of Howells, will be held at 10:30 A.M. on Saturday, February 11, 2017 at S.S. Peter and Paul Catholic Church in Howells. Visitation will be held at the church from 4 PM to 7 PM on Friday and 9:30 AM to 10:30 AM on Saturday. Rosary will be recited at 7 PM on Friday at the church. Burial will be in the church cemetery cemetery with military honors by Albin Folda Post 155 of the American Legion. Norbert died February 8 at his home. Norbert was born December 19, 1931 in Snyder, NE to Henry C and Teresa (Kaup) Langhorst. He attended rural schools and graduated from the eighth grade at S.S. Peter and Paul Catholic School. Norbert graduated from Howells High School in 1949. He was very proud to have served in the U.S. Army from May 8, 1952 to May 8, 1954, attaining the rank of Sergeant. He was one of the first radar technicians. On August 7th, 1957, he and Shirley Shuster were married at St. Augustine Catholic Church in Schuyler, NE. Norbert was a lifetime farmer south of Howells until his retirement in 1994, when they moved to Howells. He then worked at Vacin’s in the winter and worked at Indian Trails in Beemer as a groundskeeper for many years. Norbert was a member of S.S Peter and Paul Catholic Church, a 50 plus year member of the American Legion Post 155, of which he was a member of the color guard, past adjunct and Commander. He proudly played taps at funerals and other events as well as volunteered with his twin brother Robert to raise the flag at Howells home football games. Norbert loved the outdoors and wildlife, especially watching the foxes and bald eagles. He could be found outside daily making sure “his” birds were fed and watered. He enjoyed attending sporting events and cheering for the Cornhuskers Survivors include his wife, Shirley, children; Cindy(Greg) McVicker of Lincoln; Mark(Lisa) Langhorst of Ashland; Diane(Jim) Powell of Oconomowoc, WI; John Langhorst of Lexington, KY, and Michael(Denise) Langhorst of Colorado Springs, CO. Grandchildren Sarah(Jonathan) Zach of Lincoln, Mitchell McVicker of Papillion, Alex Langhorst of Tuttle, OK; Jake and Reed Powell of Oconomowoc, WI; Hannah Langhorst of Lexington, KY; and Ryan Langhorst of Madison, WI. Brother Larry(Pat) Langhorst of Liberty, MO. Brother-in-Law Robert Reiter of Valencia, CA. Sisters-in-law, Mary Langhorst of Bellevue, Myra Langhorst of Howells. He was preceded in death by his parents, sister, Marlene Reiter; brothers, Gerhard, Robert, and Dave Langhorst and sister-in-law LaVina Langhorst. Memorials can be made to Howells Volunteer Fire Dept. Howells American Legion, or Family Desire Funeral Lunch will be served at the American Legion Club.

Funeral Mass for Norbert Langhorst, age 85 of Howells, will be held at 10:30 A.M. on Saturday, February 11, 2017 at S.S. Peter and Paul Catholic Church in Howells. Visitation will be held at the church from 4 PM to 7 PM on Friday and 9:30 AM... View Obituary & Service Information

The family of Norbert Langhorst created this Life Tributes page to make it easy to share your memories.

Funeral Mass for Norbert Langhorst, age 85 of Howells, will be...

Send flowers to the Langhorst family.