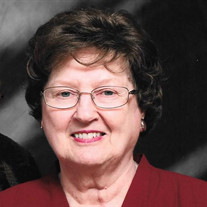 Funeral mass for Patricia “Pat” Wisnieski, age 78 of Howells, will be held at 10:30 AM on Tuesday, October 20th at St. John’s Catholic Church in Howells. Visitation will be held at the church on Monday from 3 PM to 7 PM and on Tuesday from 9:30 AM to 10:30 AM. Rosary will be recited at 7 PM on Monday. Burial will be in the St. John’s Catholic Cemetery. Pat was born in Dodge, NE on October 22, 1936 to Ernest E. and Mayme (Parr) Kauffold. She attended St. Wenceslaus Catholic School in Dodge and Dodge High School. Her senior year she attended Notre Dame Academy in Omaha, graduating in 1954. She married William A. Wisnieski on August 21, 1954 in Dodge. She worked at the Dodge Criterion for her parents and then at the Howells Journal for a short time. She was a clerk at the Howells Post Office for several years. In 1973 Bill and Pat purchased the store and opened as Bill’s Food Mart where she worked until her death on October 16th at their home. She was past president of the St. John’s Altar Society and the American Legion Auxiliary. She was active in the Howells Community Club, the Howells Library Board and the Howells Retirement Center. Pat will be remembered by many who heard her sing at weddings, funerals and other community functions. She and Leonard Kluthe performed and entertained at many local and area events in the late 1960’s and 70’s. Pat enjoyed her work at the grocery store, loved spending time with her family, and was an avid embroiderer. She also enjoyed reading, jigsaw puzzles, and cookie jar collecting with Bill. Pat really loved what she was doing and everything she was involved in. Pat is survived by her husband of 61 years, children, Pam (Adrian) Barta of Howells, Keith (LeAnn) Wisnieski of Ravenna, NE, Joy (Rich) Groene of Omaha, Judy (Doug) Gaswick of Imperial, NE, Lynn Koch of Omaha and Billie Wisnieski of Howells; 13 grandchildren; 8 great grandchildren(with 2 more on the way); siblings, Joan (Don) Andersen of CA, Iris Bicak of Kearney, Ken (Kathy) Kauffold of Dodge, NE and Richard (Mary) Kauffold of NC. She is preceded in death by infant son, Thomas, son-in-law, Jeff Koch, her parents, and sister, Jeanette Kuretich. In lieu of flowers the family suggest donations to cancer research or family wishes. Funeral lunch will be served at St. John's Social Hall.

The family of Patricia J Wisnieski created this Life Tributes page to make it easy to share your memories.

Send flowers to the Wisnieski family.