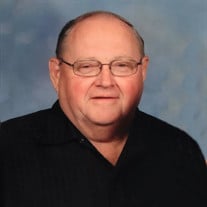 Paul Pekarek, 81, of Howells passed away Thursday, November 19, 2020 at Franciscan Healthcare in West Point. Memorials can be directed towards the Howells Community Fund. Mass of Christian Burial will be held at 10:30 on Tuesday, November 24 at St. John Nepomucene Catholic Church in Howells, with Fr. Stan Schmit officiating. Visitation will be held on Monday from 5 until 7 with a vigil service at 7 p.m. all at the church. Masks are high recommended for visitation and Mass, families will be seated by household with 6 feet distancing. Interment will be in St. John's Catholic Cemetery. Svoboda Funeral Home is handling arrangements for the family. Mass will be live streamed to the Svoboda Funeral Home Facebook Page starting at 10:25 Tuesday morning. www.facebook.com/svobodafh/ Paul A. Pekarek was born on October 10, 1939 to Lambert and Ludmila (Malena) Pekarek in Dodge County Ne. He attended St. Peter and Paul grade school and graduated from Howells High School in 1957. He attended Creighton University and in 1960 joined his father in business at Pekarek Produce. In 1961 he married Janet Tomka of Dodge, Ne. They had four children together. ​Throughout his life, Paul volunteered his time with the Howells Volunteer Fire Department and EMS and served on the Howells Town Board where he was mayor. He was a devoted member of St. John’s Catholic Church being a lector and an EMHC. Paul served on various organizations in the community. He was mayor for 8 years, served as Colfax County Commissioner for 15 years and served on the board for Howells Homes Corporation. Paul was also a very active member of the Knights of Columbus. After Janet passed away in 2002, Paul was blessed with a second chance at love when he married Val Dirkschneider on August 12, 2005. They enjoyed their years together by traveling on bus tours and meeting new people. He enjoyed many hours of wood working in his make shift shop in the garage. One of Paul’s greatest joys was spending time with the grandchildren. Survivors include, his wife Val of Howells; sons Brian (Donna) and Michael (Nicole) and daughter Ciarra all of North Carolina, daughters Pam (Brad) Toelle of Texas and Rebecca (Curtis) Rice of Texas and son Reece; Sister Marcheta Molacek. Stepchildren: Rod (Regina) Dirkschneider, Lisa (Russ) Bayer both of Howells and Sandy (Paul) Muhle of Columbus, many step grandchildren and step great-grandchildren as well as many nieces and nephews. Paul was preceded in death by his parents and his wife Janet.

Paul Pekarek, 81, of Howells passed away Thursday, November 19, 2020 at Franciscan Healthcare in West Point. Memorials can be directed towards the Howells Community Fund. Mass of Christian Burial will be held at 10:30 on Tuesday, November... View Obituary & Service Information

The family of Paul Pekarek created this Life Tributes page to make it easy to share your memories.

Send flowers to the Pekarek family.