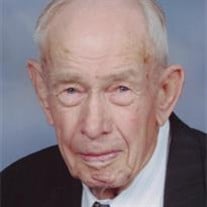 Richard was born October 7, 1920 North of Howells in Cuming County to Theodore and Barbara (Schafers) Schlautman. He attended St. Henryâ€™s Catholic School through the 2nd grade and then Cuming County rural District 51 through the 8th grade. As a young man he worked the thrashing crews in Canada and Minnesota with his brothers. He married Helen Hegemann October 16, 1946 at Sts. Peter and Paul Catholic Church in Howells and they farmed north of Howells until 1964 when they moved southwest of Howells. In 1990 they retired and moved to Howells. He was a member of the Knights of Columbus, the Farmers Union Coop Board, and served as a trustee for St. Henryâ€™s Catholic Church. He enjoyed spending time with his family. Richard died November 22nd, at the age of 92, at Parkview Home in Dodge where he had been a resident since December of 2010. Richard is survived by eight children, Donna (Richard) Limbeck of Omaha, Diane ( Dwain) Gregoire of Metairie, LA, Rita Widhelm of Howells, Mike Schlautman of Lincoln, Marty (Laurie) Schlautman of Clarkson, Steve (Karen) Schlautman of Columbus, Neal (Nancy) Schlautman of Saronville, NE, Joel (Mary) Schlautman of Lincoln; 24 grandchildren; 8 great grandchildren; one sister, Rose and her husband Ed Wolff of Dodge. He is preceded in death by his wife of 60 years, Helen, (May 18, 2007); grandson Scott Limbeck; 5 sisters, Pauline Wolff, Dorothy Diesterhaupt, Agnes Faltin, Mary Ridder and Theresa Wellman; five brothers, Raymond, Leo, Conrad, Frank and Henry Schlautman. Family suggests memorials to Howells Community Catholic Schools or St. Henryâ€™s Cemetery Fund. Funeral lunch will be served at St. John's Catholic School. To leave a message for the family - at the top of this page click "Send Condolences" / fill in YOUR name and e-mail address / type in your message / click PRIVATE (type in code) or PUBLIC / click "Add Memorial entry".

Richard was born October 7, 1920 North of Howells in Cuming County to Theodore and Barbara (Schafers) Schlautman. He attended St. Henryâ€™s Catholic School through the 2nd grade and then Cuming County rural District 51 through the 8th grade.... View Obituary & Service Information

The family of Richard Schlautman created this Life Tributes page to make it easy to share your memories.

Richard was born October 7, 1920 North of Howells in Cuming County...

Send flowers to the Schlautman family.