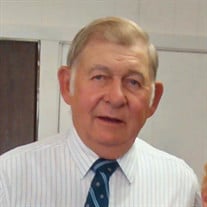 Robert Juranek, 74, of Linwood, died Tuesday, June 30, 2020 at the CHI Hospital in Schuyler. Memorials can be made in care of St. Mary’s Linwood Cemetery or to the Aquinas General Fund. A private Mass of Christian Burial will be held on Friday, July 3, at 10 a.m. at Sts. Peter and Paul Catholic Church in Abie, with Fr. Ronald Homes officiating. Visitation with no family present will be Thursday from 5 until 7 p.m. at the church. A family rosary will be recited at 9:30 on Friday 30 minutes prior to Mass. Interment will be in St. Mary’s Linwood Cemetery. Robert “Bob” Juranek was born on November 7, 1945 in North Bend to Leo Sr. and Mildred (Cech) Juranek. He graduated from Aquinas High School in David City and went on to receive is Associates degree in Mechanics. At a dance at the Oak Ball Room in Schuyler he met the love of his life, Dorothy Chmelka, and the couple was later married on October 4, 1969 at Holy Trinity Catholic Church in Brainard. Bob could almost always be found outdoors, hunting deer, fishing in his favorite spots, or fixing things around the farm. He took great pride in the fact that he was a life long farmer and he loved taking care of his cattle herd. With his knowledge of mechanics there wasn’t a car or tractor that he couldn’t solve the problems of. Bob took on the responsibility of taking care of several of the local rural cemeteries and made sure that they were taken care of. His grandchildren were the light of his life and he enjoyed spending time with them, especially out at the cabin where they could work on projects together. In his spare time Bob also enjoyed playing 5-point pitch with friends and ringing the bells at church after the remodel was completed. Bob is survived by his wife of 50 years Dorothy of Linwood, children: Carol (David) Browning, grandchildren Josephine and Emily, of Omaha; David (Laura) Juranek, grandchildren Abigail and Leopold, of Olathe, Kansas; Andrew (Nicole) Juranek, grandchildren Oliver and Owen, of Council Bluffs, IA; brother Leo Jr. (Mary) Juranek of Linwood; sister Joyce (John) Gardner of Omaha; and several nieces and nephews. He was preceded in death by his parents.

Robert Juranek, 74, of Linwood, died Tuesday, June 30, 2020 at the CHI Hospital in Schuyler. Memorials can be made in care of St. Mary&#8217;s Linwood Cemetery or to the Aquinas General Fund. A private Mass of Christian Burial will be held... View Obituary & Service Information

The family of Robert Juranek created this Life Tributes page to make it easy to share your memories.

Send flowers to the Juranek family.