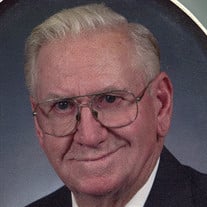 A Celebration of Life Service for Robert Kassmeier, age 88 of Dodge, will be held on Bob’s birthday, Monday, February 16th at St. John’s Catholic Church in Howells. The family will greet friends starting at 4:00 PM followed by a Prayer Service at 6:30 PM with a reception in St. John’s School after the service. Bob was born February 16, 1926, on the family farm in Colfax County. He was the last of nine children born to John and Elizabeth (Liekhus) Kassmeier. Bob received his formal education at Sacred Heart Academy in Olean. He rode his horse the four miles to Olean until the 8th grade, when he drove a 1927 Whippet to school. He did not get to attend high school because his parents needed him on the farm.. He successfully developed and expanded the farm, making it his lifelong profession. He was a self-taught welder, mechanic and brilliant engineer. He loved being in his shop, where he spent thousands of hours building machinery and farm implements. In addition to farming, Bob did custom farm work including corn shelling and grinding, combining and hay baling. Bob designed and built their current family home in 1968, just 15 feet from the home where he was born. On April 11, 1951 Bob married Frances Clare Wisnieski, at St. Wenceslaus Catholic Church in Dodge. Bob was a lifelong member of Sacred Heart Parish at Olean, served on the Colfax County ASC Committee for several years, was a member of the Catholic Order of Foresters, the Howells Bowling Team which he sponsored, and the Howells Jaycees when it was active. He enjoyed time with his family, grandchildren and great grandchild, as well as his nieces and nephews. Bob passed away peacefully in his sleep February 2, 2015, just two weeks before his 89th birthday. His wish was granted, as he hoped to pass on the home place, where he had lived his entire life. Bob is survived by his wife, Fran, of Dodge; two sons, Randy of New Orleans; Rodney (Mary) of Omaha and their children, Bob (Ellen) and their daughter, Evelyn and Jaclyn Kassmeier (partner Adam Orand); two daughters, Vicki (Stuart) Denker of Omaha and their children, Jake, Joey and Jenna; Kathy (Dan) Lanphier; nieces and nephews. Robert is preceded in death by his parents; two brothers, Raymond and William; six sisters, Gertrude Sendgraff, Verna Evert, Minnie Evert, Helen Romatko, Irma Kassmeier and Marian Belz. In lieu of flowers memorials are suggested to Family Choice.

A Celebration of Life Service for Robert Kassmeier, age 88 of Dodge, will be held on Bob&#8217;s birthday, Monday, February 16th at St. John&#8217;s Catholic Church in Howells. The family will greet friends starting at 4:00 PM followed by a... View Obituary & Service Information

The family of Robert Kassmeier created this Life Tributes page to make it easy to share your memories.

A Celebration of Life Service for Robert Kassmeier, age 88 of...

Send flowers to the Kassmeier family.