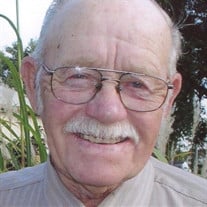 Robert Langhorst, 84, of Howells, died Thursday, September 15, 2016 at Osmond Memorial Hospital. Memorials: Family Choice Robert was born on December 19, 1931 at Snyder, Nebraska to Henry C. and Teresa(Kaup)Langhorst. He attended rural schools and graduated from the 8th grade at Ss. Peter and Paul Catholic School. He graduated from Howells High School in 1949. He was very proud to have served in the U.S. Army from May 8, 1952 to May 8, 1954, attaining the ran of Corporal. He served with the A Battery 70th AAA Gun Battalion at Ft. Mead, MD. On August 17, 1957 he and Myra Rupprecht were married at Ss. Peter and Paul Catholic Church by Fr. Paul Schneider. Robert was a lifetime farmer south of Howells and retired in 1993. He was a member of the Ss. Peter and Paul Catholic Church and a past EME, a 50 plus year member of the American Legion Post 155, of which he was member of the Colorguard and past adjutant and Commander. He proudly volunteered to raise the American Flag at Howells home football games with this twin brother, Norbert. He was a past president of the Howells School Bus Board and past president of the board of directors of Farmers Union Co-Op of Howells and Dodge. He was a school bus driver for approximately 10 years beginning the mid 1990's. Robert loved the outdoors and wildlife, especially seeing wild bald eagles. He enjoyed attending the sports and school activities of his grandchildren and was a big fan of the Cornhuskers, Bobcats, and Jaguars, attending countless games during his lifetime. Survivors include his wife, Myra, children: Gail and Dennis Bazata of Randolph, NE, Dan Langhorst of Chandler, AZ, Judy and Derek Andersen of Lincoln, NE, Tom Langhorst and Betty Wiedeman of Howells, and Nancy and Dale Wolfgram of Lincoln, NE, Grandchildren: Bryan and Claire Bazata of Cozard, NE, Erin and Heath Anderson of Sheldon, IA, and Ellie and Olivia Wolfgram of Lincoln, NE. Great-grandsons: Max and Gabe Bazata of Cozad and Kellen Anderson of Sheldon, IA. Twin brother, Norbert and Shirley Langhorst of Howells, brother, Larry and Pat Langhorst of Liberty, MO, brother-in-law: Robert Reiter of Valencia, CA,, sister-in-law, Mary Langhorst of Bellevue, NE. He was preceded in death by his parents, his sister, Marlene Reiter, two brothers: Gerhard and Dave Langhorst and sister-in-law Lavina Langhorst. Graveside Military Honors by Albin Folda American Legion Post 155 of Howells, Nebraska.

The family of Robert Langhorst created this Life Tributes page to make it easy to share your memories.

Send flowers to the Langhorst family.