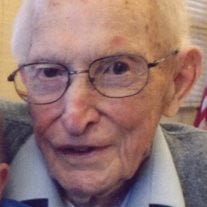 Robert died January 4, 2014, at the age of 96, at Golden Living Center in Schuyler where he had been a resident for the past two years. Robert Mutt was born April 9, 1917 in Schuyler to Ray and Bertha (Keller) Mentzer and when he was a small boy the family moved to a farm north of Richland. In 1928 Ray bought a gravel business and they moved back to Schuyler. Robert graduated from Schuyler High School in 1935 and for the next three months he worked in the ice cream stand on the corner of 10th and Colfax for George W. Baldwin. He then worked for the next three years for B.F. Groulik at Nebraska Oil. He was hauling gravel for his dad and brothers when he was called into the Army in 1942 and he spend the next four years in military service with one year in the European Theater of Operations. After being discharged he returned to hauling gravel until January of 1951 when he and Anson Kohler leased the Mobil Station on the corner of 11th and Colfax. They continued to run Kohler and Mentzer Oil until May of 1974 when Anson retired. Robert continued to operate the business until June of 1980. After leaving the oil station he worked part time for Kucera Funeral Home until December of 1992 when the business was purchased by Svoboda Funeral Home and Robert continued to work for the new firm until July of 2002. He also worked part time for the Schuyler Sun for many years along- side his son, Curt. He was an avid Yankee’s fan and enjoyed sports of all kinds. Robert was a strong supporter of the Schuyler community and had a deep love for his hometown. Throughout life he enjoyed playing cards, horseshoes, bowling, fishing, hunting, and shooting pool. He liked to travel and cherished his trips to Hawaii with Iola. He was also a music and movie buff. Robert and Iola Foust were married on May 22, 1941 and he was a devoted husband for 72 years. To their union three children were born: Donna is married to Larry Peterson of Omaha, Marilyn died shortly after birth, Curt and his wife, Teresa of Schuyler. There are five grandchildren, Kelly Wrehe, Kari Torchia and Max (Jen) Mentzer all of Omaha, Alex (Lisa) Mentzer and Sam Mentzer both of Chicago. There are also six great grandchildren. Robert is preceded in death by his parents; brothers and sister-in-laws, James (Bernice) and Bill (Helen): sisters Gertrude (John) Prokes, Esther Mentzer and Gladys (Earl) Trofholz. Family suggest memorials to "Family Wishes". Funeral lunch will be served at the church following burial in the Schuyler Cemtery.

Robert died January 4, 2014, at the age of 96, at Golden Living Center in Schuyler where he had been a resident for the past two years. Robert Mutt was born April 9, 1917 in Schuyler to Ray and Bertha (Keller) Mentzer and when he was a small... View Obituary & Service Information

The family of Robert Mentzer created this Life Tributes page to make it easy to share your memories.