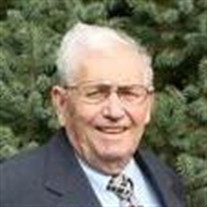 Funeral mass for Robert J. Polodna (age 82 of Schuyler) will be held Wednesday, December 31st at 10:30 AM at St. Mary’s Catholic Church. Visitation will be held at St. Mary’s Catholic Church in Schuyler on Tuesday, December 30th from 4 PM to 7 PM. Rosary will be recited at 7 PM on Tuesday at the church. Visitation on Wednesday will be held from 9:30 AM to 10:30 AM. Military grave side services will be held at 2 PM on Wednesday in the Clarkson Catholic Cemetery in Clarkson Robert Joseph Polodna was born March 5, 1932 in Stanton County to Charles and Antonia (Vrbicky) Polodna. He attended school in rural Stanton County speaking only Czech, but learned English very quickly. He graduated from Howells High School in 1950. After High School, he went to work at Severa’s Garage in Clarkson as a parts man. Bob entered the United States Army in 1951 and served in the Korean War until his honorable discharge in 1953. On October 19, 1954 , he married Mariann Pieper at St. Joseph’s Catholic Church in Dodge. Bob and Mariann lived in Columbus, Nebraska for two years prior to moving to a farm northeast of Clarkson and two years they moved to a farm south of Clarkson. Bob was a lifelong musician. He played the saxaphone and was a vocalist with many bands over the years including the Solid 8, Frank Kucera Orchestra, and the Don Telecky Band. Robert was a member of St. Mary’s Catholic Church in Schuyler, the Clarkson Knights of Columbus and the Clarkson V. F. W. Bob also loved tractors and collected many miniature tractors and machinery. Robert died December 28, 2014 at the Golden Living Center in Schuyler. Bob is survived by his wife Mariann, of Schuyler, one daughter, Diane (Gary and daughter Rachel) Vig of Minneapolis, three sons, Duane (Kathleen and children Angela and Brian) of Omaha, Donald (Nancy and children Mallery, Austin and Alex) of Norfolk and Dan (Cheryl and children Nick, Jake and Katie) of Omaha. He was preceded in death by his parents, sisters, Blanche Cada and Mary Cech; brothers, Chuck and Mike Polodna. In lieu of flowers, the family suggests memorials to the American Heart Association or the Parkinson’s Foundation. Funeral lunch will be held in St. Mary's Social Center immidiatelly following the mass.

The family of Robert Polodna created this Life Tributes page to make it easy to share your memories.

Funeral mass for Robert J. Polodna (age 82 of Schuyler) will...

Send flowers to the Polodna family.