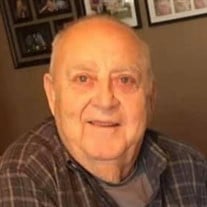 Robert Svoboda, 83, of Schuyler died on Wednesday, October 7, 2020 at St. Elizabeth’s Hospital in Lincoln surrounded by his family. Memorials can be directed towards St. John’s Lutheran Church or Family Wishes. Funeral Services will be held on Tuesday, October 13 at 10:30 a.m. at St. John’s Lutheran Church in Schuyler, with Rev. Amanda Hefner officiating. Visitation will be held on Monday from 5 until 7 p.m. at Svoboda Funeral Home-North Chapel. Masks will be required for the visitation and funeral service. Military Honors will be provided by Hespen-Mitchell Post #4836 V.F.W. Lunch will follow immediately after the service with interment in the Clarkson National Cemetery in Clarkson at 1:30 p.m. Svoboda Funeral Home is assisting the family with arrangements. The funeral service will be streamed to the St. John’s Facebook page: https://m.facebook.com/StJohnsLutheranSchuyler/ Robert Lambert Svoboda was born on December 28, 1936 on the family farm in northern Colfax County to Frank Joseph and Esther (Nadrchal) Svoboda. He graduated from Howells High School, and went on to serve in the United States Army from 1960 to 1962. After his discharge, Bob married Shirley (Votava) Malosek on February 14, 1967. Farming was Bob’s life; he enjoyed and knew every aspect of what needed to happen to grow the best crop possible. He enjoyed planting the seed, tending to that seed as it grew, and especially loved harvest in the fall. What brought Bob the most joy was his daughter Vicky farming by side and watching his legacy being passed on to his grandchildren and teaching them to love the land the way he did. He sold seed for many years, sold crop insurance, and was also an insurance adjuster for a time. Aside from farming, Bob enjoyed repurposing items he salvaged from various projects or that he scooped up at a garage sale. When he wasn’t repurposing Bob enjoyed going to Menards to use his rebates or stopping to have a conversation with just about anyone. Bob’s church meant a great deal to him and he could be found there every Sunday, he served on parish council several times and was a part of the committee to help build the new St. John’s church. His family was extremely important to him and he would do anything to help someone in need. Bob is survived by his wife of 53 years, Shirley of Schuyler; daughters Vicky Borman and Julie Swanson both of Schuyler; grandchildren: Dillon (Brittani) Swanson and daughter Cerenittee, Michael (fiancé Angie Yrkoski) Swanson, Haylie Swanson (fiancé Joshua Appleton) and daughter Anastasia, Hope Borman, and Riley (fiancé Alex Kohl) Borman and daughter Aria; brother David (Lynn) Svoboda, sister Joan Smejkal, brother-in-law Milo F. Brichacek; sister-in-law Patricia Svoboda, and many nieces and nephews. He is preceded in death by his parents, brothers Frank E. (Valdean) Svoboda, and Joseph Svoboda; sisters: Dorothy Brichacek and Betty (Robert) Glodowski.

The family of Robert L. Svoboda created this Life Tributes page to make it easy to share your memories.

Send flowers to the Svoboda family.