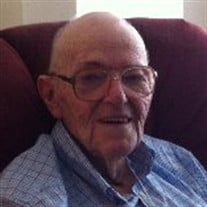 Robert Wolfe, 86, of Schuyler, died Monday, June 16, 2014 at Golden Living Center in Schuyler, Nebraska. Bob was born February 19, 1928, in Schuyler to John and Gladys Wolfe. He graduated from Schuyler High School and joined his dad in their farming operation. On January 15, 1949, he married his best friend, Shirley Lucke. Together they had a SENTIMENTAL JOURNEY of 65 years. They lived and farmed northwest of Schuyler, and eventually retired in town. Bob was the longest living member of the Masonic Lodge Acacia 34. He was also a Scottish Rite Lodge Member, as well as a member of the Shrine Tangier Temple of Omaha. Moose always had a great sense of humor and enjoyed spending time with family and friends, He LOVED taking rides in the country to check out the crops. He is survived by two daughters, Jeanne (Gary) Briggs of Grand Island and Kathy (Tom) Horejsi of Lincoln; one son, Mike (Joan) Wolfe of Chandler, Arizona; five grandchildren, Abby (Matt) Davis, Jennifer Horejsi and Dom Trupiano, Molly (Dustin) Asher, Grant Horejsi, Chelsea Wolfe and Zander Brownlie-Edward; five great granddaughters, Audra and Stella Davis, Claire, Ellie and Kate Asher. His wife, Shirley Wolfe preceded him in death on April 18, 2014. In lieu of flowers, memorials may be given to the family for future designation.

The family of Robert Wolfe created this Life Tributes page to make it easy to share your memories.

Send flowers to the Wolfe family.