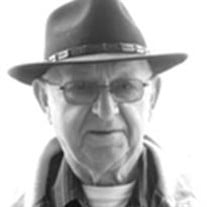 Roman Joseph Renner, 75, of Howells, passed away Monday, October 8, 2012 at his home. A Mass of Christian Burial will be held at 10:30 a.m. Saturday, October 13 at S.S. Peter & Paul Catholic Church in Howells. Visitation will be at the church from 2:00 p.m. until 7:00 p.m. on Friday, Oct. 12 with a Rosary at 3:00 p.m. and 7:00 p.m. Visitation will continue on Saturday at the church, one hour before services. Burial will be in the S.S. Peter & Paul Catholic Cemetery. Roman was born to Catherine (Timmerman) and Frank Renner on August 4, 1937, on a farm north of Beemer, Nebraska. He attended St. Aloysius school until the 8th grade (1945), when he contracted polio. He overcame polio-related disabilities with surgical correction and continued to farm with his father. Roman married Margaret Hader on June 3, 1961, at St. Henry's Catholic Church in rural Stanton County. Togethher they had four children: LaDonna Konsel (Omaha, NE), Barbara Shapiro (Topeka, KS), Brenda Coppard, (Omaha, NE), and David Roman Renner (Salt Lake City, UT). Grandchildren include Brett and Ryan Konsel, Sarah Shapiro, and Katie Coppard. In addition to farming, Roman worked for CBK, Inc. until he started his own construction company. Subsequently, he worked for the Brabec Construction Company, in which close bonds were made, linking, Kevin Brabec and brothers as extended family. Roman served in the Army Reserve, and was a member of the Knights of Columbus, the American Legion, Saints Peter and Paul parish, and Alcoholics Anonymous. Roman was preceded in death by his parents, Catherine and Frank Renner; brothers Donald and Anthony Renner; and son-inlaw William Konsel. He is survived by his wife, 4 children, 4 grandchildren, and brothers Arthur Renner (Bennington, NE) and Harvey Renner (Fremont, NE). Roman was widely loved. His customers often cooked him dinners, and enjoyed listening to his stories, his creative and ingenious solutions to engineering, architectural and construction problems. His co-workers and friends truly enjoyed spending time with him. Roman had a passion for restoring antique John Deere tractors, participating in the Great Nebraska Tractor Ride, woodworking, fishing, and playing cards with his special friends. Six weeks prior to his death, Roman developed the first symptoms of a rapidly progressive and rare caner of the small intestine, which shortened his lifespan immensely. He was surrounded by family up until the day he died, and will forever be missed. Roman was an inspiration to all who knew him and was the eternal optimist. In lieu of flowers, donations may be given to the American Cancer Society, Franciscan Care Services (West Point, Nebraska), the Howells Community Catholic Schools, and Alcoholics Anonymous (Snyder chapter). To leave a message for the family - at the top of this page click "Send Condolences" / fill in YOUR name and e-mail address / type in your message / click PRIVATE (type in code) or PUBLIC / click "Add Memorial entry".

Roman Joseph Renner, 75, of Howells, passed away Monday, October 8, 2012 at his home. A Mass of Christian Burial will be held at 10:30 a.m. Saturday, October 13 at S.S. Peter & Paul Catholic Church in Howells. Visitation will be at the church... View Obituary & Service Information

The family of Roman Renner created this Life Tributes page to make it easy to share your memories.

Send flowers to the Renner family.