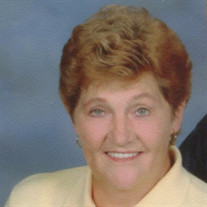 A Mass of Christian Burial for Rose Ann Gall, 72, of Howells will be held at 10:30 A.M. on Friday, April 10, 2015 at St. John of Nepomucene Catholic Church in Howells. Visitation will be from 4:00 P.M. until 7:00 P.M. on Thursday at the church followed by a Rosary at 7:00 P.M. Visitation will continue on Friday one hour before services. Burial will be in the Clarkson Catholic Cemetery. Rose Ann passed away Sunday, April 5th in West Point. Rose Ann was born March 5, 1943 in Schuyler to Joseph and Wilma (Stara) Cech. She graduated from Schuyler High School in 1961. On December 27, 1961 Rose Ann married Robert J. Gall at St. Mary’s Catholic Church in Schuyler. Bob and Rose Ann farmed north of Clarkson for many years before moving to Howells to open the Prairie Schooner Inn restaurant. She later became a favored cook at Howells and then Schuyler schools. After retiring she had many requests for her bakery and passed the time filling those orders. Rose Ann was a member of St. John of Nepomucene Catholic Church in Howells and the Altar Society. She enjoyed baking and dancing and was an excellent seamstress. Family was important to her and she loved spending time with her family and especially her grandkids. She was a devoted wife, mother, grandmother, sister and friend. In her own words she was “a jack of all trades, but master of none.” Rose Ann is survived by her children: Nancy (Mark) Stewart of Shelby, Pam Albers of Papillion, Cindy (Lynn) Beebe of Schuyler, Bonnie (Greg) Podany of Stanton, Kelly (Tom) Reisdorff of David City, Amy (Shawn) Wattier of Silver Creek, Wanda (Clint) Nilson of Aurora, CO, R.J. (Jess) Gall of Norfolk, Andrea (Joe) Baack of Seward, Sarah (Gene) Daniel of Stanton; 26 grandkids, 2 great grandkids, brothers and sisters: Jerry Cech of Clarkson, Judy (Ken) Meyer of Columbus, Jan (Marty) Czaplewski of Kearney, Lorraine Book of Creston and Linda Cech of Aurora, NE. She was preceded in death by her parents, husband Bob in 2012, son-in-law Kevin Albers, grandsons Lance Nilson and Kipton Daniel and brother-in-law Roger Miller. Memorials are suggested to the Howells “Kindness Club” or Family’s Choice.

The family of Rose Ann Gall created this Life Tributes page to make it easy to share your memories.

A Mass of Christian Burial for Rose Ann Gall, 72, of Howells...

Send flowers to the Gall family.