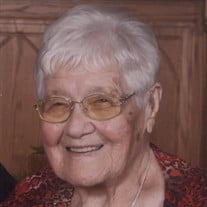 Mass of Christian Burial for Rose Shonka, age 101 of Schuyler, will be held at 10:30 AM on Saturday, November 21, 2015 at St. Mary’s Catholic Church. Visitation will be held at the church on Friday from 4 PM to 7 PM and on Saturday from 9:30 AM to 10:30 AM. A combined Parish and Knights of Columbus rosary will be recited at 7 PM Friday at the church. Burial will be in the Schuyler Cemetery. Rose died November 17th at Hillcrest Rehabilitation Center in Bellevue. Rose Marie was born June 26, 1914 on a farm near Linwood to Frank and Adeline (Viglicky) Hovorka. She attended rural school District 86 and graduated from Linwood High School in 1933. Upon graduation Rose worked in uncle’s bakery, clerked in the Golden Rule Store and did housework, all in Schuyler. On August 17, 1937 she married Leonard Shonka at St. Mary’s Catholic Church in Schuyler. They lived on the farm Leonard was born on their entire married lives. Rose was a member of Divine Mercy Parish and the Guild. She enjoyed her family, friends, cooking and baking and lived life to the fullest, including her trip to Alaska for her 100th birthday. Rose is survived by their 3 daughters, Mary Marxsen, Fran ( Rich) Kment both of Schuyler and Carolyn (Wally) Panasiuk of Lincoln, seven grandchildren, Scott Rief of Omaha, Sandy (Chuck) Walker of Kansas City, Barb (Mike) Flynn of Bennington, Bonnie (Marc) Lindahl of Columbus, Tammy (Jason) Kemp of Colorado Springs, Justin Panasiuk (Special friend Michael Davis) and Brandon (Heather) Panasiuk of Omaha; Eleven great grandchildren, Sierra and Forest Walker of Kansas City, Evan, Carly and Maya Flynn of Bennington, Jesse Clement, Anne Lindahl both of Columbus, Jackson and Oliva Kemp of Colorado Springs, Owen and Myles Panasiuk of Omaha. Rose was preceded in death by her husband, Leonard (3/20/2005), sisters, Emma and Adeline Hovorka; brothers, Anton, Joseph and Stanly Hovorka. Family suggest memorials to Schuyler Cemetery, Schuyler Volunteer Fire and Rescue or donors choice. Funeral lunch will be served at St. Mary's Social Hall..

Mass of Christian Burial for Rose Shonka, age 101 of Schuyler, will be held at 10:30 AM on Saturday, November 21, 2015 at St. Mary&#8217;s Catholic Church. Visitation will be held at the church on Friday from 4 PM to 7 PM and on Saturday from... View Obituary & Service Information

The family of Rose Shonka created this Life Tributes page to make it easy to share your memories.

Mass of Christian Burial for Rose Shonka, age 101 of Schuyler,...

Send flowers to the Shonka family.