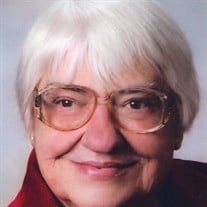 Rosean Marie Porter, 83, died on Tuesday March 15, 2016, in Omaha. after a courageous fight with Cancer. Funeral services will be Monday, March 21 at 10:00 A.M. at the Svoboda Funeral Home, North Chapel, in Schuyler. Visitation will be on Sunday March 20th from 3:00 P.M. to 7:00 P.M. and will resume on Monday from 9:00 A.M. until service time. Burial will be in the Schuyler Cemetery. Rosean was born on January 8, 1933 in Schuyler, NE to Godfrey and Marie (Srb) Machal. After graduating from Schuyler High School in 1950, she moved to Omaha and attended Clarkson College of Nursing and the University of Omaha, graduating as a BSN in 1956. During this time she met the love of her life, Pat Porter. They were married on April 1, 1956 in Schuyler. Married for 35 years before Pat’s death in 1991, they raised two children, Rick and Mary. Rosean worked during her pre-child years at Clarkson Hospital. She put her nursing career on hold to raise her kids, supporting them in every way imaginable through music lessons, sports, Cub Scouts, Blue-Birds and being school room mother before returning to her nursing roots at Methodist Hospital where she worked until retiring at the age of 79. She was a true Husker Football fan and loved making the trips to the games with Pat in their Big Red van. She is survived by her son Rick (Laura) Porter, daughter Mary Zoe (Wes) Finkner, grandchildren Max (Ashli) Porter, Alexa (Jared) Davis, Elizabeth (Kevin) Walters and Andrew Finkner, Sister-In-Law Clarice Machal-Titus. She has 3 Greatgrandchildren and Nieces and Nephews. Rosean was proceeded in death by her husband, her parents and her Brother Godfrey Machal Jr. Memorials are suggested "In Care of the Family".

Rosean Marie Porter, 83, died on Tuesday March 15, 2016, in Omaha. after a courageous fight with Cancer. Funeral services will be Monday, March 21 at 10:00 A.M. at the Svoboda Funeral Home, North Chapel, in Schuyler. Visitation will... View Obituary & Service Information

The family of Rosean Porter created this Life Tributes page to make it easy to share your memories.

Send flowers to the Porter family.