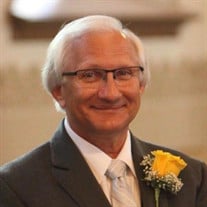 Russell Edward Reha, 65, of Schuyler, Nebraska, passed away June 13, 2020, at his home surrounded by his family. Memorials can be directed towards Family Wishes. Mass of Christian Burial will be held on Wednesday, June 17 at 10:30 a.m. at St. Augustine’s Catholic Church in Schuyler, Fr. Gerry Gonderinger officiating. Religious gathering rules of socially distanced seating will be observed for the Mass and rosary, those attending are required to wear face masks as well as for the visitation. Visitation with no family present will be Tuesday from 4:00 until 6:45 p.m. at St. Augustine’s with a parish rosary recited at 7:00 p.m. New Directed Health Measures mandate 25 people will be allowed in the church at one time for the visitation. Interment will be in Holy Cross Cemetery. Russ was born April 17, 1955 to Edward and Ethel (Sylvester) Reha in David City, NE. Russ grew up in Bellwood, NE and was a 1973 graduate of David City Public High School. He worked for 43 years in automotive parts management and inventory. He was married to Carol Scanlon on October 16, 1976 in St. Augustine’s Church. Russ was active in his church, serving as former president of the Divine Mercy Parish Council, Eucharistic Minister of Holy Communion, and usher. He was also active in his community coaching baseball and serving as former president of the Schuyler Baseball Corporation. As a youth, he was a boy scout and later served as a scout leader for his sons. Russ was an avid Nebraska Cornhuskers fan and looked forward to attending Nebraska football and baseball games. One of his lifelong dreams came true in 1991 when he was able to secure season football tickets. For the next 29 years with very few exceptions, you could count on Russ and Carol cheering on the Huskers from Memorial Stadium every home game. Not unexpectedly, Husker away games became a common destination for spending time and making memories with so many of Russ’s closest friends. Russ had a lifelong love for the game of baseball. He spent his younger years playing second base in his hometown of Bellwood, NE, and enjoyed many years of making memories with friends. Russ traded in his bat and glove for a scorebook and roster and coached little league through American Legion Baseball for 30 years. During that time, he coached all four of his sons through their entire baseball careers and continued coaching the youth of Schuyler for many years thereafter. Russ considered coaching a privilege and used the game to teach life lessons reminding his players, “Baseball is like the game of life; you fail more often than you succeed but that shouldn’t keep you from playing the game.” Russ also loved gardening, taking care of his landscaping, and manicuring his lawn to create an outdoor oasis. In his final years, when not at home or watching the Huskers, he enjoyed traveling with his wife, family, and friends and worked to make a lifetime of memories for all to share. Russ loved being a grandpa and was his grandsons’ biggest fan at all of their activities. Survived by wife, Carol; sons Christopher (Katrina) Reha, Kyler and Cohen, Pender, NE; Curtis (Lacey) Reha, Lincoln, NE; Cole (Channing) Reha, Grayson, Pender, NE; Craig (Christine) Reha, future grandson Papillion, NE; mother Ethel Reha, Bellwood, NE; brother Larry Reha, Bellwood, NE; sister Connie (Gary) Janicek, Seward, NE; niece Mikala (Peter) Ray, Ryder, Griffin, Gretna NE; nephew Jared Janicek, Linwood, NE. He is preceded in death by his father, Edward Reha and niece, Sarah Reha.

Russell Edward Reha, 65, of Schuyler, Nebraska, passed away June 13, 2020, at his home surrounded by his family. Memorials can be directed towards Family Wishes. Mass of Christian Burial will be held on Wednesday, June 17 at 10:30 a.m. at... View Obituary & Service Information

The family of Russell E. Reha created this Life Tributes page to make it easy to share your memories.

Send flowers to the Reha family.