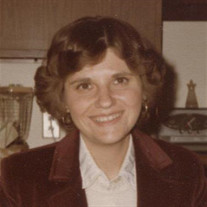 Funeral service for 69 year old Sandy Vondracek of Lincoln, formerly of Schuyler will be held at 10:30 AM on Friday, September 4, 2015 at the Christ United Methodist Church in Schuyler. Visitation will be held on Thursday from 4 PM to 7 PM at the Svoboda Funeral Home South Chapel and on Friday starting at 9:30 AM at the church. Burial will be in the Schuyler Cemetery. Sandy was born October 29, 1945 in Columbus, NE and was the third oldest of six children born to Lymann and Naomi (Worthing Holman) Muehlich. She attended grade school in Octavia, NE, Junior High and High School in Schuyler and graduated in 1964. On April 18, 1965 she and Royal Z. Vondracek, Jr. were married in Schuyler. Sandy owned and operated Billie’s Tots & Teens in Schuyler and after they moved to Lincoln in 1988 she worked for Smith-Barney Brokerage and later worked as the Executive Assistant to the President of the Kimmel Foundation. Sandy was involved in Rainbow Girls, ESA Sorority, Brownies and Girl Scouts of America, was a Lay Minister, taught Sunday school, sang in the church choir and was active in the youth group and VBS of the United Methodist Church. Sandy enjoyed reading her bible, going on rides around Lincoln with Roy and taking care of her flowers. Sandy died August 30, 2015 at their home in Lincoln. Sand is survived by her husband, Roy of Lincoln; daughters, Stacy (Doug) Johnson of Pierce, NE and Jennifer (Steve) Zatechka of Cordova, TN; six grandchildren, Ashton, Ali, Annie and Addison Johnson and Carter and Caden Zatechka; three sisters, Carol Whitmore and Gale Pokorny-Furry (Gene) both of Lincoln and Judy (Roy) Walling of Fullerton, CA; brothers, John (Nellie) Muehlich of Schuyler and Garry (Kathy) Muehlich of Rancho Cucamonga, CA. She is preceded in death by her parents. Memorials suggested to Alzheimer’s Association. To donate online go to alz.org and click on Tribute/Memorial Donation. Funeral lunch will be served at the church following the committal service at the cemetery.

Funeral service for 69 year old Sandy Vondracek of Lincoln, formerly of Schuyler will be held at 10:30 AM on Friday, September 4, 2015 at the Christ United Methodist Church in Schuyler. Visitation will be held on Thursday from 4 PM to 7 PM... View Obituary & Service Information

The family of Sandy Vondracek created this Life Tributes page to make it easy to share your memories.

Send flowers to the Vondracek family.