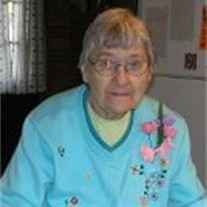 Shirley was born September 27, 1926 in Alcester, SD to Peder and Inga (Stene) Jamtgaard. She attended Star School District #61 in Union County SD and graduated from Alcester High School in 1945. During her high school years she cleaned houses for elderly neighbors on week-ends and during the summer. Shirley married Marvin Harry Hartman on August 23, 1945 at Roseni Church south of Beresford, SD. At that time Marvin was already in the Army but a week after the wedding he was shipped out to the Aleutian Islands until October of 1946. While he was gone Shirley worked different jobs and then in March of 1947 they started farming west of Hudson, SD. They continued to farm while moving to several different locations, March of 1950 the moved to Craig, IA. March of 1952 they moved to Ireton, IA, March of 1955 they moved to Canton, SD, March of 1959 they moved west of Hawarden, IA on the SD side of the border. Then in 1962 they had a farm sale and moved north east of Schuyler where they lived until moving into Schuyler in 1980. Besides being a homemaker Shirley worked as a waitress, a clerk at the Ben Franklin Store in Schuyler, cleaned houses for the elderly and worked sales as a clerk for Marvin's auction business. Shirley drove the Senior Citizens Minibus on Tuesdays for several years and was active in St. John's Lutheran Church. Shirley moved to Columbus in 2004. She died on March 1st, at the age of 85, at the Golden LivingCenter in Columbus where she had been a resident since December of 2011. Shirley is survived by two sons, Larry (Marlene) Hartman and Mark (Deborah) Hartman both of Schuyler; four daughters, Janet (Steve) Gay of Maple Lake, MN, Virginia (Steven) Reichmuth of Columbus, Nancy (Richard) Limbach of Humphrey and Barbara Brichacek and her special friend Todd Vermeline of Malmo; 18 grandchildren; 42 great grandchildren; two sisters-in-law, Betty Jamtgaard of Alcester, SD and Amy Jamtgaard of Clear Lake, IA. She is preceded in death by her husband, Marvin (6/15/2003); infant son 1/4/1953); daughter, Susan Kay Hartman (2/16/1979); granddaughter, Jennifer Catina Gay ((/5/2000); brothers, Orval, Silas and Robert Jamtgaard; sister-in-law, Arlene Jamtgaard. Family suggest memorials to St. John's Lutheran Church or Family Choice. The funeral lunch will be served at St. John's Lutheran Church folowing the burial in the Schuyler Cemetery. To leave a message for the family - at the top of this page click "Send Condolences" / fill in YOUR name and e-mail address / type in your message / click PRIVATE (type in code) or PUBLIC / click "Add Memorial entry".

The family of Shirley Hartman created this Life Tributes page to make it easy to share your memories.

Send flowers to the Hartman family.