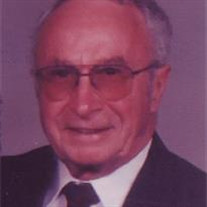 Burial will be at 3 PM on Monday at the St. Mary's Catholic Cemetery in Leigh with Military Honors by American Legion Sucha Post 302 of Leigh and McLeod Post #47 of the American Legion and the Hespen-Mitchell Post 4836 of the V.F.W. both of Schuyler. Urban was born November 17, 1927 at Crawford, NE to Urban and Frieda (Wullschleger) Imholte. He graduated from Leigh High in 1945. He served in US Army from 1950 to 1952 with tours in Korea and Japan. Urban married Alice Ternus on August 22, 1950 at St. Francis Catholic Church in Humphrey and they farmed and operated a dairy farm near Leigh until 1990 when he became the Colfax County Veterans Service Officer, a post he held until 2002. He is a member of the Knights of Columbus 4th Degree, 40 & 8, American Legion and the V.F.W., the NE Association of Service Officers, NAEM. While living at Leigh he served on the School Board, Co-Op Board, Tri County Board, Community Club and the church council. He enjoyed reading, playing cards, traveling and following sports. Urban died January 19th at the Golden LivingCenter in Schuylerat the age of 82. Urban is survived by his wife, Alice of Schuyler; seven children, James and his wife Peg of Overland Park, KS, Janet (Mrs. Harley) Loseke of Richland, Joan (Mrs. Dave) Hollatz of Creston, Kathy (Mrs. Jim) Berger of Louisville, KY, Keith and his wife Nancy of Senica, KS, Beth (Mrs. Russ) Kuhr of Leigh, Mark and his wife Andrea of Eureka, MO; 21 grandchildren; 11 great grandchildren; one brother, Rev. Otto Imholte of Ireland; two sisters, Noreen (Mrs. Odell) Marchant of Sparks, NV and Eileen (Mrs. Frank) Paulus of West Des Moines, IA. He is preceded in death by his parents and one grandson, Paul Hollatz. Family suggest memorial to Family Choice. Funeral lunch will be served immedately following the mass at the St. Mary's Social Center in Schuyler. To leave a message for the family - at the top of this page click "Send Condolences" / fill in YOUR name and e-mail address / type in your message / click PRIVATE (type in code) or PUBLIC / click "Add Memorial entry".

Burial will be at 3 PM on Monday at the St. Mary's Catholic Cemetery in Leigh with Military Honors by American Legion Sucha Post 302 of Leigh and McLeod Post #47 of the American Legion and the Hespen-Mitchell Post 4836 of the V.F.W. both of... View Obituary & Service Information

The family of Urban Imholte created this Life Tributes page to make it easy to share your memories.

Send flowers to the Imholte family.