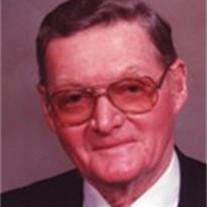 Wendelin C. Dinslage, age 91, passed away peacefully on Monday, August 20, 2012, at the Parkview Nursing Home in Dodge, NE. Funeral Mass will be on Friday, August 24th at 10:30 a.m. at S.S. Peter and Paul Catholic Church in Howells, NE. Visitation will be on Thursday from 2:30 p.m. until 8:00 p.m. at S.S. Peter and Paul Catholic Church with Rosaries at 3:00 p.m. and 7:30 p.m. Visitation will continue on Friday from 9:30 a.m. until service time at the church. Carl Wendelin Dinslage was born on January 23, 1921, at rural Aloys to John and Catherine (Guenther) Dinslage. He attended St. Aloysius Catholic School at Aloys, NE for eight years. On May 22, 1945, he was united in marriage to Bernardine Uhing at St. Aloysius Catholic Church. The day of the wedding Wendelin received his draft notice to report for duty. He served in the Navy as a Seabee in Guam from 1945 - 1946. Wendelin farmed by Howells until retirement in 1984 when his true passion emerged - woodworking. He purchased a saw mill and cut and milled the trees for lumber in the building of their home. He was quite the woodworker making many toys and furniture for his grandchildren and roll top desks for his children. His latest prized project was carving English hobby horses. Wendelin made and donated many wooden items to school fundraisers over the years and will be missed for his talent and generosity. Survivors include: children: Janice (Russ) Priess of Raymond, NE; Leroy (Deb) Dinslage of Seward, NE; Dennis (Agnes) Dinslage of West Point, NE; Sharon Wieneke of Syracuse, NE; Karen (Bob) Heinen of DeSoto, KS; and Lorraine (Dave) Prusa of Firth, NE; eighteen grandchildren and sixteen great grandchildren; brother and sisters-in-law: Norbert (Elaine) Dinslage of Clarkson, NE; Erma Dinslage of West Point, NE; and Delores Balak of McKinney, TX. Wendelin was preceded in death by his parents, wife Bernardine in 2006, brothers and sisters-in-law: Edwin "Butch" Dinslage, Angela & George Steffensmeier, Raymond Dinslage, Virgil (Lucille) Sila, Alice and George Plumlee, Leo (Verdene) Uhing and Alan Balak. Memorials are suggested to: St. Francis Hospice, S.S. Peter and Paul Cemetery and St. Josephs Retirement Community. To leave a message for the family - at the top of this page click "Send Condolences" / fill in YOUR name and e-mail address / type in your message / click PRIVATE (type in code) or PUBLIC / click "Add Memorial entry".

The family of Wendelin Dinslage created this Life Tributes page to make it easy to share your memories.

Send flowers to the Dinslage family.