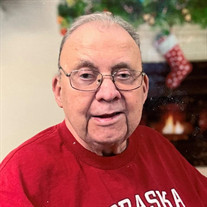 William "Bill" D. Houfek, 78, formerly of Schuyler passed away on Thursday, December 16, 2021 at the Butler County Health Care Center in David City. Memorials can be directed towards Family Wishes for later designation. Mass of Christian Burial will be at 10:30 on Tuesday, December 21, at St. Mary’s Catholic Church in Schuyler with Fr. Gerry Gonderinger officiating. Visitation will be from 6 until 7 p.m. Monday with a 7 p.m. Knights of Columbus Rosary at Svoboda Funeral Home, 905 A St. Interment will be in the Schuyler Cemetery with Lunch following in the St. Mary’s Social Hall. Svoboda Funeral Home is handling arrangements for the family. The Mass will be live streamed to the Svoboda Funeral Home Facebook page beginning 10 minutes prior to service. www.facebook.com/SvobodaFH/ William Dean Houfek was born on December 1, 1943 in Clarkson, Nebraska to William F. and Vlasta (Glodowski) Houfek. He graduated from Schuyler High School in 1962 and furthered his education at the Lincoln Business School. After college, Bill did the bookkeeping for Wigington Chevrolet for over 20 years until the dealership closed, he then started in David City at Henningsen Foods where he also worked for over 20 years until his retirement in 2007. Bill enjoyed many of the simple pleasures that life had to offer. He enjoyed being at home listening to his polka records, going for a Sunday drive for a nice meal out, or cheering on the Huskers. Some of Bill’s favorite gatherings throughout the week were when the guys would gather at his house for Wednesday night Taroks, and seeing all of his friends at weekly bowling league. Bill was a very devout Catholic and faithful member of the Knights of Columbus, where he held several roles and obtained the honor of 4th Degree. Bill is survived by his brother Ron (Julie) Houfek of Schuyler, brother-in-law Bernard Heavican, many nieces and nephews, and many great nieces and nephews. He is preceded in death by his parents and sister Elaine Heavican.

The family of William "Bill" D. Houfek created this Life Tributes page to make it easy to share your memories.

Send flowers to the Houfek family.