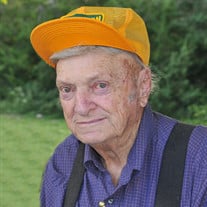 William "Bill" Swanda, 87, of Schuyler passed away Thursday, August 9, at his home. William E. Swanda was born on October 26, 1930 in Uehling, Nebraska to Frank and Antonia (Barcal) Swanda. He attended Schuyler High School, and graduated in 1949, and then went on to serve in the United States Army during the Korean War. After being discharged from the Army he married JoAnn Holzerland, the love of his life, on August 24, 1953. Bill loved spending time outdoors, and could usually be found fishing, gardening, and horse back riding in his younger years. He had become a staple at his daughter Janis' daycare and was known as "Papa" to all of the daycare kids. Every day Bill made a point to find time for his favorite show, "The Young and the Restless;" he was a faithful fan of the show for over 30 years. He also loved all animals, any type of football, and playing card games, specifically the game In-Between, with his family. He is survived by his three daughters: Linda (Larry) Konz of Schuyler, Janis Swanda of Schuyler, and Cathy Swanda of Omaha; grandchildren and great-grandchildren: Jason Swanda and special friend Eve of Schuyler, Lynn (Stephanie) Konz of Omaha, Carla (Chris) Degn and Luca of Omaha, and Lisa (Craig) Andrews, Jase and Amaya of Omaha; brother Frank Swanda of Fremont; sister Barbara Ehrenberger of California, and his special pet cat, Alex. Bill is preceded in death by his parents, wife JoAnn in 1982; four sisters: Alice, Ruth, Gladys, and Rose; and one brother Lad Swanda. Memorials can be directed towards Paws and Claws in Columbus.

William "Bill" Swanda, 87, of Schuyler passed away Thursday, August 9, at his home. William E. Swanda was born on October 26, 1930 in Uehling, Nebraska to Frank and Antonia (Barcal) Swanda. He attended Schuyler High School, and graduated in... View Obituary & Service Information

The family of William E Swanda created this Life Tributes page to make it easy to share your memories.

Send flowers to the Swanda family.